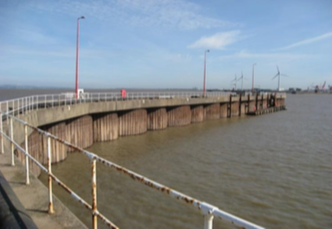 The lead-in jetty for the port is used by ships to approach a lock that allows them to enter the port. The lead-in jetty is composed of a series of steel cylinders filled with sand. The port believed that an instability was developing and that some of the cylinders were subject to corrosion. STRAAM made on-site measurements, conducted a finite element study and identified areas of the jetty that was compromised. Subsequently, the cells were repaired and STRAAM returned to assess the efficiency of the repairs. It was shown that they had been very effective

STRAAM Group has developed the SKG (Structurocardiograph). For this set of measurements the mark 1 SKG was used with internally mounted accelerometers. On site personnel now use a mark 2 SKG to make measurements themselves and then remove a data card and send the information to the STRAAM headquarters in New York City. The new arrangement allows for the collection of more data coupled with lower costs.

The Port was furnished with a baseline measurement and with a blueprint for action should a ship impact occur. In practice yearly inspections and inspections after incidents have been scheduled with a series of measurements being made at the site. Now on-site personnel have been trained to take the measurements and they have come to rely on quick assessments of impact damage and of the gradual degradation of the structure.